As COVID-19 continues to upend the American economy, news comes from Baltimore, and likely many other U.S. cities, that the government is being forced to curtail public transit to save money. While the news will be troubling to many low- to middle-income commuters, it could also have a profound and surprising effect on the educational system, as well.

Just how profound is made clear in a new study in the journal Educational Researcher by a team of experts at the Johns Hopkins University School of Education and Sociology Department. The team married student data with public transit data to show that longer, more complex commutes are three times more likely to lead a student to transfer schools.

“Commuting stress hasn’t traditionally been on the radar in education research literature,” says Marc Stein, an associate professor in the School of Education at Johns Hopkins University and research co-director of the Baltimore Education Research Consortium (BERC), the study’s first author. “We found that travel time is a strong predictor of early high school transfer.”

This news is particularly distressing for Baltimore City Public Schools as it is an open enrollment system. All students entering high school can choose among any of the city’s public high schools, which opens up educational options for students, but often necessitates use of public transportation to get to class.

“We see kids going from everywhere to everywhere,” Stein says.

Stein and research colleagues, Julia Burdick-Will, an assistant professor of sociology and education, and Jeffrey Grigg, an assistant professor of education who died suddenly in 2019, examined administrative data of some 3,900 Baltimore students from the 2014–2015 school year. Using the students’ home addresses, they were able to plot likely commute routes and estimate commute times for each student to their schools of choice.

The team is able to estimate total travel time from home to school, including wait times and walking, and the number of vehicles a child would take. It’s not just total time that is a factor, Stein asserts, but the complexity of the trip, as well.

“This is the third in a series of studies looking at the effect of transportation on what we call school disengagement characterized by tardiness, absenteeism, and school transfers,” Stein explains.

In crunching the data, the team found that students whose commute is an hour or more are three times more likely to transfer than those with commutes of 10 minutes or less. Concomitantly, the researchers found that, in choosing to transfer, students often opted for schools that were closer to home and required fewer vehicle transfers, even when those new schools were not among the top five schools in their rank-ordered school preference lists.

School transfers are an indication of student dissatisfaction, Stein says, perhaps not necessarily with the schools themselves, but with the process of getting to and from schools. Instead, the students are in essence opting for closer schools over better schools—or, at the very least, schools that are a better fit.

As for the consequences of school transfer on student performance, especially in the early years of high school, Stein says the team did not go so far as to tie this research to school performance. But, he says, there is a large body of existing work on the consequences of transfer. All else being equal, he says, a transfer is not generally good for students, especially into a school that was not even on the student’s preferred list.

Next up is examining the large-scale changes to the transit system in 2017 known as BaltimoreLink to examine the influence of commuting difficulty on enrollment in and academic success at the city’s selective enrollment high schools. Stein and Burdick-Will are also working with colleagues at the Institute for Data Intensive Engineering and Science to develop a real-time database of Baltimore transit and crime data that can be used to estimate daily variation in commuting difficulty and its effects on student engagement.

He also points out that the proposed cuts in public transit are occurring at a time when most if not all Baltimore students are engaged in online learning. The effects of these changes on students won’t become apparent until next year at the earliest.

Baltimore, for instance, is cutting some 20 percent of services, totally eliminating 25 routes and extending time between busses. That will likely mean longer waits for the student, Stein cautions.

“We need to start to think all that through,” Stein says. “It’s likely going to impact kids quite a lot.” 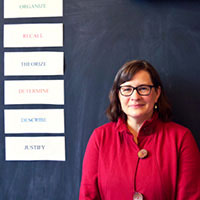 After Owning a Successful Business, Rebecca Penniman ’16 Plunges Into Teaching