After years of focusing on securing foundation and state-level grants to support its research, the School of Education increasingly is putting effort into winning a greater number of federal grants as well. These grants are typically larger in scope and bring with them additional resources that are often not included in foundation and state funding.

To that end, in the most recent fiscal year, ending June 30, the School of Education saw a 20 percent increase in the number of federal grant proposals submitted compared to the previous year. Since July 1, School of Education researchers submitted a remarkable 13 federal Institute of Education Sciences proposals on or prior to an August 29 deadline. Eight of these proposals were led by SOE faculty, and five were collaborations on projects led by colleagues at other research organizations.

That is not to say the school has abandoned its traditional strength in funding, however. In fiscal year 2019, the school was awarded roughly $25.5 million; with roughly 51 percent coming as federal pass-through dollars such as state funding and 36 percent as nonfederal dollars such as foundation grants. In all, for fiscal year 2019, there was a 33 percent increase in SOE proposals submitted, and a 31 percent increase in funds awarded. Some awards will span several years.

While state contracts and other activities made up the lion’s share of funding, researchers had success with foundations, receiving awards from some of the country’s leading private funders including The Spencer Foundation, the Bill & Melinda Gates Foundation, and The Annie E. Casey Foundation.

“It’s encouraging to see the rewards from our efforts to submit more grant proposals overall,” says Dean Christopher Morphew. “And it’s exciting to see faculty looking at new areas of opportunity, particularly in the most competitive federal grants supporting education research. It’s promising for the future of the school and the field of education.”

In fiscal year 2019, the school was awarded roughly $3.2 million in highly competitive federal grants. But that figure may increase as the awards from recent proposals are announced, the dean says.

Mariale Hardiman, professor and director of the school’s Neuro-Education Initiative, was one of those who sought and won new federal funding. She will be a co-principal investigator with two colleagues from Georgetown and Penn State universities, on a 3-year, $1.1 million National Science Foundation–funded study looking at ways to measure and encourage creative thinking in STEM education.

“STEM teachers need to develop students to become creative thinkers and problem solvers,” Hardiman says. “With this test, we hope to both define what scientific creativity looks like and to help teachers to encourage divergent thinking that promotes discovery and innovation.”

Additional awards that have been received since July include the following: Professors Deborah Carran and Laurie deBettencourt and Associate Professor Tamara Marder each received separate grants totaling $205,000 from the Maryland State Department of Education to support their special education work in the state. 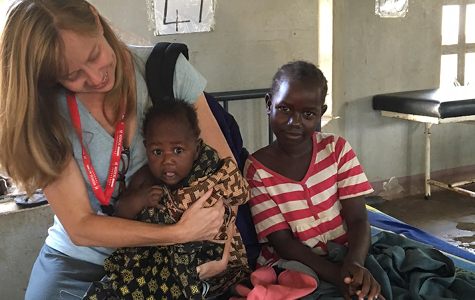