When she finished as runner-up in the competition, which convenes young Pakistani women from around the world, Aamir was far from disappointed. She saw it as an opportunity to use her influence and connections to educate and empower the Pakistani community about important issues like mental health and gender roles—topics that are often still shrouded in stigma.

Distinctive recognition is nothing new for Aamir, who emigrated with her family to the United States from Lahore, Pakistan, when she was seven years old. She won her first superlative honor in the fifth grade when she was voted “Most likely to become the first female Pakistani American ambassador.”

This May, during Mental Health Awareness Month, fellow counseling candidate Kunaal Doshi caught up with Aamir to get the inside story on the pageant, her career in mental health, and her experience at the School of Education.

Tell us about the pageant. How did you get involved?

Neha Aamir: I didn’t know that the pageant existed. The president [of Miss Pakistan USA] reached out to me and recruited me into it. I was really apprehensive about it because I had never done anything like it before… When I imagine “pageant girls,” I imagine six feet tall, very skinny, beautiful—and I am none of those things! But I guess there was a bigger purpose behind it, and I think I come from a really unique culture where I am a product of two nations: I’m Pakistani, born and raised, and then I’m also American. Honestly, anything that I see as an opportunity to represent both nations, I see as a good platform.

Were you pushed to participate, or was the decision yours alone?

NA: It was definitely a decision I made on my own. Given the culture I’m from, everyone was pretty confused about it—or they were like “Oh, what would people think?” But they didn’t understand that the purpose behind it was to improve representation of our culture, as well as to step out of our comfort zones.

What are some lessons you took away from your pageant experience?

NA: Being in the counseling field, I’m always challenging my own clients to try new things, and when they found out about this, they looked back at me and asked, “Why aren’t you doing the same exact thing?” I really took that to heart.

But the biggest thing for me was to always be true to myself. I’ve told my experience and my truth of being a Muslim, Pakistani, woman…and just using that as a way to just speak the language of love. I’m not going to stop doing that, no matter what. It was a personal win, because I became more confident and helped to cement my identity.

Did your clients’ finding out about your participation affect your relationship with them?

NA: Not really. I try to be as authentic as possible. You have to have to a connection with your clients, and as counselors, we sometimes have to be role models for our clients. If we can show that we are constantly challenging ourselves, then that’s good for them to learn.

The fact that I didn’t win also gives me motivation to double my efforts! It was always much bigger than winning for me. It’s been fun! I’ve had interesting experiences, like being on TV shows, and it’s nice to be able to wear so many hats—daytime therapist, weekend pageant queen, master’s degree student—which have allowed me to meet so many awesome people and have interesting conversations.

Is it tough to balance everything?

NA: No, I really like having a lot to do; it allows me to be creative. I’m always thinking about my next move, and if I didn’t do this, I wouldn’t have had so many interesting experiences. For example, I’m involved in the project to build Pakistan’s biggest cancer hospital. And I got to have a voice in the discussion around mental health, which is huge for a country like Pakistan.

Can you give us a little insight into the Pakistani community in the United States?

NA: I am a first generation immigrant, and “we,” as in the youth, are in a position where our parents have grown up in Pakistan and have their own culture, while we are in between two different cultures. For me and the people I surround myself with, we use both of identities as strong parts of who we are. There’s a great Pakistani community here, but because of the perceptions of being Pakistani, being Muslim, or even being brown, I feel… there’s a new generation that needs more role models in a positive light. I’m highly focused on helping girls—especially South Asian girls—and traditional norms are so outdated.

How have you managed to retain your Pakistani identity while adapting to American society?

NA: It has a lot to do with my parents, who for one, made us talk in both English and Urdu. Rather than being embarrassed about certain things, we’ve turned it around to laugh at ourselves. We’ve learned to pick and choose elements of both cultures that suit us. When you share a part of your culture with others, more often than not they fall in love with what you’ve fallen in love with. It’s all about opening our mindset.

What is the attitude towards mental health in the Pakistani community? And what role do you think you can play in changing attitudes?

NA: There is a long way to go. It’s a culture to sweep difficult issues under the rug and not have conversations about them. Plus, there’s an attitude where what happens in the family stays in the family. People are reluctant to share personal stories about themselves, because they are worried about their reputation in the society. There’s also a lot of cultural shame and a lot of “shushing.”

With regards to counseling, the culture of confidentiality needs to be emphasized. Furthermore, bringing men into it is a big challenge. In my experience, there’s a lot of disconnect, and as counselors, we connect from our head to our heart and to each other. If we have more people going into this field, then the future looks bright. Education and awareness are huge components. As a young woman, I’m challenged for being “too young” and “inexperienced,” or I am called “confused’ or “too modern.” In Pakistan, I’m too American; here I’m too Pakistani. I think it’s always good to learn from each other.

Can you speak about some of the psychological struggles immigrants face when coming to and trying to adapt to the United States?

NA: The obvious challenge is the disparity in support: You’re here in a new country with a new language, and you don’t have the same people around you. Navigating daily life is also really challenging, because everything is different. While the United States is a melting pot of different cultures, you are not immune to backlash and discrimination. How do you prepare for that? Especially with the recent political atmosphere, it’s actually gotten worse. It’s been even harder than when my family came after 9/11 in that there’s been an increase in hate crimes. Something even happened in my own family and in my own hometown, which was really shocking.

In your experience, what should counselors in training know about working with immigrants or people of dual cultures?

NA: I think the biggest thing is that what works for you might not work for them, and it’s really important to broach issues to really understand their worldview. Another piece of advice I can give is don’t go into thinking you’re a savior and that you know exactly what to do. I think as helpers, we can sometimes get too much of an ego, but we don’t actually know their struggles—and they are the expert on themselves. When you’re genuinely interested in them, you collaboratively come up with the answers. Keeping an open heart and mind is key.

Any advice for young immigrants, especially women and minorities on thriving in the United States?

NA: There’s opportunity everywhere. We are really lucky that there are so many opportunities in this country. If you see injustice, you have the opportunity to speak out. You have the ability to write to your senators and delegates and to petition. If you want to immerse yourself and find your identity, there are some amazing experiences to be had in this country, as well as the possibility to meet some amazing people. Try your best and be kind to everyone. That deletes so many problems.

Not many people from our culture go into the mental health field. What made you decide to pursue a career in mental health? What are your future plans?

NA: As a child, I was very observant and emotionally intelligent. A lot of what I saw didn’t make sense, and I was charged to speak up and question the inequalities and injustices I saw. I was just lucky that there was a career in what I was interested in, because it doesn’t feel like work. It is what I love.

Life is not a roller-coaster, like people say, because [with a roller-coaster] you know when the peaks and troughs come. Life is an adventure, and you really don’t know when will things happen. I’m always interested in how people came to be where they are. As counselors, people come to us thinking they are broken, but they don’t really know that what they think breaks them is actually a strength they didn’t know they had.

What has been your experience in the counseling program here at the School of Education? Have you been inspired by any professors here?

NA: Surprisingly, this program has been a life-changing experience. The counseling program is geared for you to break yourself down and understand yourself before you can understand anyone else. I’ve learned a lot about myself, and that has been very empowering. It’s been difficult, because this is the hard part. I wish this was a life experience that everyone had and not just something that was required. I think this self-awareness is a superpower that we all have, which is amazing. As for professors, I would say Dr. Ramaswamy and Dr. Preston-Dillion—their passion has been really inspiring. 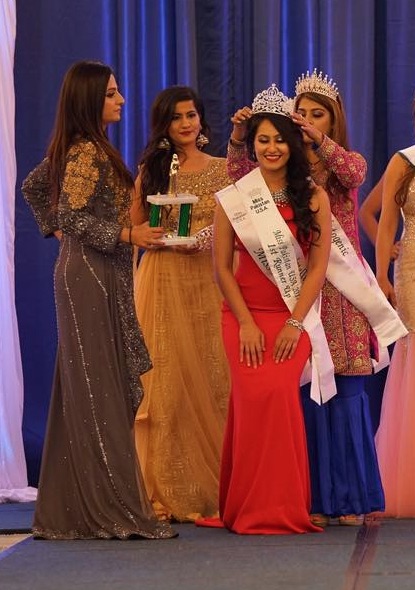 Neha Aamir getting crowned as Miss Pakistan USA first-runner up

Master of Science in Counseling 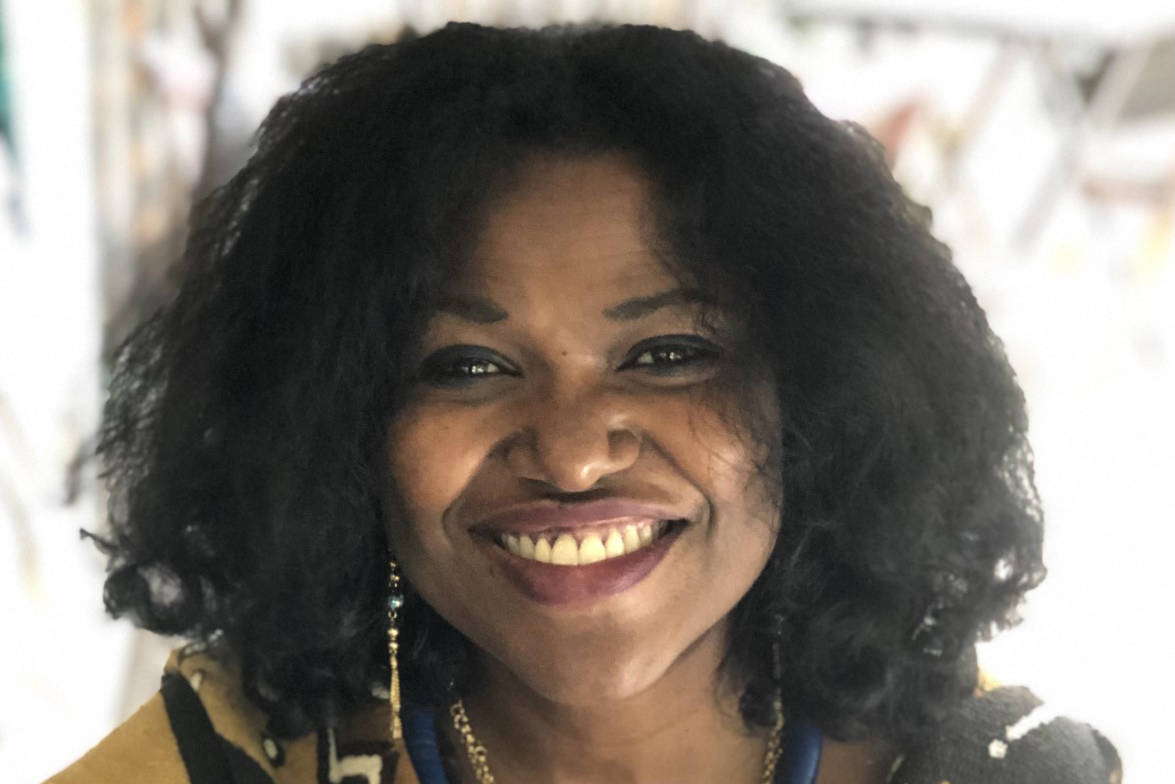