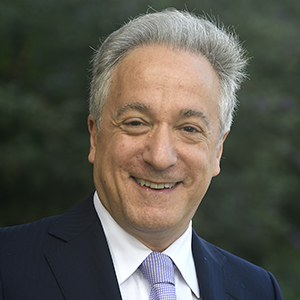 Professor, Executive Director of the Institute for Education Policy

David Steiner is Executive Director of the Johns Hopkins Institute for Education Policy and Professor of Education at Johns Hopkins University. In 2020, he finished serving as a member of the Maryland State Board of Education and the Maryland Commission for Innovation and Excellence in Education. He currently serves on the boards of Core Knowledge Foundation, and Relay Graduate School of Education. Most recently, he was appointed to the Practitioner Council at the Hoover Institute, Stanford University. He previously served on the board of Urban Teachers as well. He also served as Commissioner of Education for New York State, as the Klara and Larry Silverstein Dean at the Hunter College School of Education, and as Director of Education at the National Endowment

As NYS Commissioner, Dr. Steiner took a lead role in the State’s successful $700 million Race to the Top application to support the redesign of state standards, assessments, and teacher certification requirements. His insistence on including major funding for curricula in that grant led to the launch of EngageNY, the nation’s most consulted on-line curriculum resource. Dr. Steiner consults regularly with the federal government, state education leaders, educational reform organizations, and universities. He has addressed audiences on both side of the Atlantic, and authored books, book chapters, and more than fifty articles. He holds degrees from Balliol College, Oxford University (B.A. and M.A.), and Harvard University (Ph.D. in political science). Contact David at d.steiner@jhu.edu.

2009-2011 – New York State Commissioner of Education, President of the University of the State of New York, Albany NY.

2002-2004 – Chairman, Department of Administration, Training, and Policy Studies (ATPS), School of Education, Boston University. (Previously, tenured in ATPS and the Department of Curriculum and Teaching.)

2017 Steiner, D. Curriculum Research: What We Know and Where We Need to Go (for StandardsWork, available online at https://standardswork.org/wp-content/uploads/2017/03/sw-curriculum-research-report-fnl.pdf).

2017 Steiner, D. “On Teaching Controversy” a review of Jonathan Zimmerman and Emily Robertson, The Case for Contention in Education Next, vol.17, no. 3 (Summer 2017).

BOARD AND COMMISSION REPRESENTATION

2016-2020 — State Commission on Innovation and Excellence in Education, (“The Kirwan Commission”) State of Maryland, (Annapolis, MD).

2011 — Member, Executive Committee, Partnership for the Assessment of Readiness for College and Careers (PARCC).

2012-present — US Department of Education (Office of the Secretary) (Washington DC),

2020 (forthcoming) Steiner, D. with Bjorklund-Young, A. “The Future of School Accountability.” To be published by the Hoover Institute, Stanford University.

2020                     Steiner, D with Slavin, R. “Tutoring as an effective strategy in our troubled times,” in The Education Gadfly Weekly. https://fordhaminstitute.org/national/commentary/tutoring-effective-strategy-our-troubled-times

2020                     Steiner, D with Bakshi, S. “Acceleration, not remediation: Lessons from the field,” in The Education Gadfly Weekly. https://fordhaminstitute.org/national/commentary/acceleration-not-remediation-lessons-field

2020                     Steiner, D with Magee, M. “Students Worldwide Have Gone Back to School After COVID-19. 4 Lessons for Reopening America’s Classrooms,” in The 74. https://www.the74million.org/article/magee-steiner-students-worldwide-have-gone-back-to-school-after-covid-19-4-lessons-for-reopening-americas-classrooms/

2020                     Steiner, D with Weisberg, D. “When Students Go Back to School, Too Many Will Start the Year Behind. Here’s How to Catch Them Up — in Real Time,” in The 74. https://www.the74million.org/article/steiner-weisberg-when-students-go-back-to-school-too-many-will-start-the-year-behind-heres-how-to-catch-them-up-in-real-time/

2019                     Steiner, D. “Staying on the shelf: Why rigorous new curricula aren’t being used,” in The Education Gadfly Weekly. https://fordhaminstitute.org/national/commentary/staying-shelf-why-rigorous-new-curricula-arent-being-used

2019                     Steiner, D. “Knowledge is power: Why our students need less of Franklin’s wit and more of Madison’s wisdom,” in The Education Gadfly Weekly. https://fordhaminstitute.org/national/commentary/knowledge-power-why-our-students-need-less-franklins-wit-and-more-madisons

Basics: Achieving a Liberal Education for All Children, Finn, C. and Ravitch,

Review and Recommendations (for the New Jersey Department of Education).

2020                     Panelist for “How Should School Systems Prepare for Re-Entry and Beyond?” Education Under COVID-19: Problems, Solutions, Perspectives, and Research webinar series. Presented by the World Bank and HSE University, Russia. June 16.

2020                     Invited speaker at the Legislative Conference of the National Association of State Boards of Education (NASBE). Washington DC. March 23. Cancelled due to Coronavirus.

2020                     “Building Conditions to Support LEAs in Adopting and Implementing High Quality Materials.” Webinar for the Johns Hopkins Institute for Education Policy in partnership with Achievement Network. Baltimore, MD. March 19. Postponed due to Coronavirus.

2016                     “Prospects for the Role of Evidence to Inform State Implementation of ESSA,” Discussant at The SREE Spring 2016 Conference: Lost in Translation: Building Pathways from Knowledge to Action with Mitchell D. Chester, Commissioner, Massachusetts Department of Elementary and Secondary Education, Washington DC, March 5.

2011                     “Innovation of Teacher Education,” delivered at the Commission of Independent Colleges and Universities Board of Directors meeting, Albany, NY, March 8.

2006                     “Moving Beyond the Basics: Why Reading, Math and Science are not Sufficient for a 21st Century Education” Presenter at the launch meeting of the Thomas Fordham Foundation, Washington DC, December 12.

2002                     “Mapping and Overcoming Barriers to Alternative Public School Leadership,” with Chester Finn and others, Thomas B. Fordham Institute, Washington DC.

2000                     “African-American Educational Performance,” National Conference on “ African Americans at the Turn of the Century”  (With Orlando Patterson and others, hosted by Salmagundi).

1995                     “Levinas and the Limits of Political Theory,” and “Administering Education,” (Chair) Roundtable with John Chubb and Benjamin Barber, both at the American Political Science Association Annual Meeting, Chicago.

2003-2005            Senior Consultant, Council, Institute for International Corporate Cultural Affairs, along with Professor Sam Huntingdon and others), advising the bank and a multinational consortium on ethics, education and cultural projects. 2003 – 2005.

1998-1999            Educational Commissioner, Politeia (1998-9, London, UK), worked on programs for comparative study of assessments in the United States, Europe, and the new independent states of the ex-USSR.

1995-1998            Consultant, then Resident Scholar at the Leonard Bernstein Center for Education Through the Arts contributed to the design, teaching, and evaluation of the Center’s curricular designs. New York and Nashville, 1995-1998.

1997                     Reviewer of Curricular and Assessment designs for the Modern Red School House (1997). Special focus on the relationship between Performance Statements, Standards, the “Hudson Units,” and the “Individual Educational Compact.”

2001-2006            Designed and Co-Directed Summer Content Institutes for the State of Massachusetts in the humanities. Led workshops on Shakespeare, Chaucer, and other major authors, incorporating multi-media teaching strategies, formative and summative assessment techniques, and writing evaluations.

1998                     Consultant to the Nashville Metro School System (through the “Schools for Thought” initiative at Vanderbilt University). Preparing teachers for the adequate introduction and adaptation of E.D. Hirsch’s “Core Curriculum.”

2017-Present         Listed amongst the 200 most influential education scholars in the United States in the annual RHSU Edu-Scholar Public Influence Rankings.

2016-Present          PI and Co-PI on multiple grants as Executive Director, Johns Hopkins Institute for Education Policy, including $200,000 from the Baton Rouge foundation and $340,200 from NWEA for design work on the Pilot Assessment for Louisiana, and $267,000 from Chiefs for Change. The Institute conducted $1.52 million in sponsored research in FY 19, and has over $1million in sponsored research to date committed for FY 20.

2008 and 2009       CUNY Award for Securing Major External Funding in the domain of Education, presented by Chancellor Matt Goldstein.

2007                     Principal Investigator: Five-year Teacher Quality Program grant from the US Department of Education to support design and implementation of new teacher residency program with New Visions for Public Schools ($6 million).

2008-2009            Appointed to the Regents Work Group on Improving the Preparation of Teachers for Urban Schools, The New York State Education Department.

2006-present         Consultant for the Common Core Curriculum Project: Thomas B. Fordham Foundation, Washington D.C., and member of the Steering Committee.

2006-present         Board of Trustees of the Core Knowledge National Advisory Committee, Charlottesville, Virginia.

2006-2007            Member of the MLA National Initiative on the future of Liberal Arts Education, known as the Teagle Working Group. This group includes several college presidents, the current and the next president of the MLA, and several distinguished professors from Columbia, Yale, and the University of Virginia.