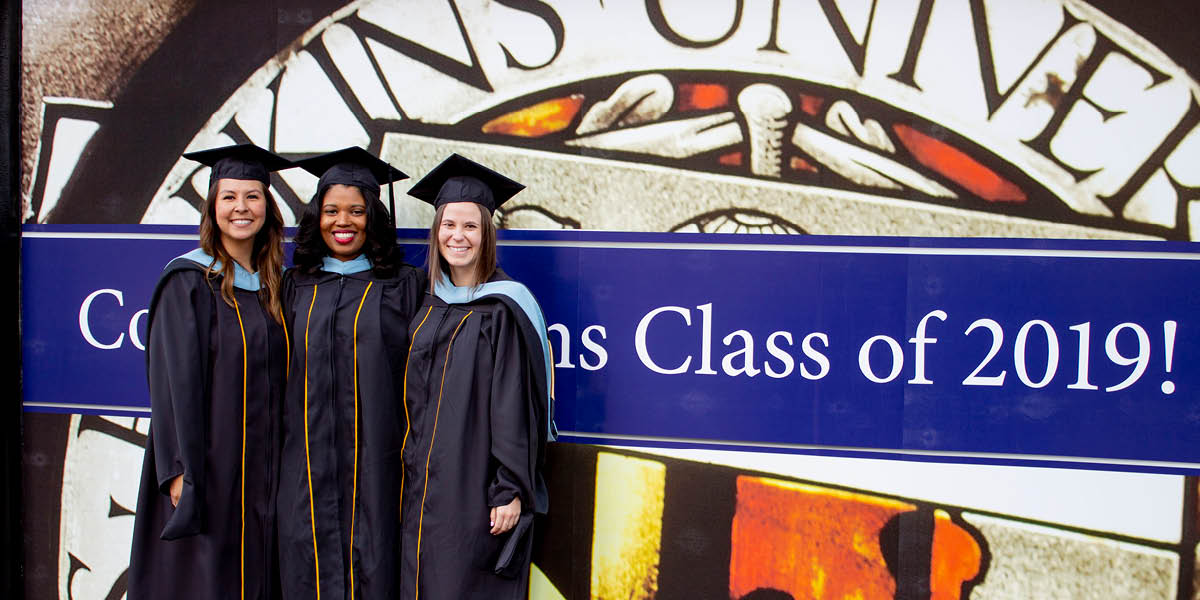 Three years after receiving her master’s degree from the Johns Hopkins School of Education, Kelly Harper, MS ’16, returned to the very same stage at Baltimore’s Royal Farms Arena to deliver the school’s commencement address, now widely recognized as one our nation’s top educators. She urged graduates to use their “new, powerful degrees… to help build capacity in others, to help them build and strengthen their voices.”

Harper’s return capped a joyful, spirited graduation event that recognized the academic achievements of more than a thousand individual degree recipients, as well as the professional accomplishments of many illustrious alumni and friends. The occasion marked a record for the most degrees and certificates the School of Education has conferred (1,045) during an academic year since becoming a stand-alone unit in 2007.  Among that number was its largest-ever cohort of doctoral degree recipients, with 44 EdD candidates and five PhD candidates receiving doctoral hoods from their faculty advisers.

After a warm welcome by Vice Dean Mariale M. Hardiman, Dean Christopher C. Morphew presided over his second graduation as dean of the School of Education. In his opening remarks, Morphew thanked the 620 candidates in attendance for bringing “positive energy, bold ideas, and passion for change to Johns Hopkins to tackle the nation’s most pressing education challenges.” He went on to commend them for choosing “a path focused on helping individuals and communities better themselves.”

For Harper, a third-grade teacher at Amiden-Bowen Elementary School in Washington, D.C., who was named a 2019 National Teacher of the Year finalist, that path has not always been an easy one. In her keynote remarks, she described being disengaged and misunderstood as a middle-school student, until one thoughtful teacher pulled her aside and gave her guidance on how to speak up for herself in a productive way. It was a formative lesson for Harper, who was recently described in Education Week as “a champion of student activism.”

“Early in my education career, I realized that I needed to become a teacher like Ms. McLurkin,” she said, acknowledging her early mentor. “I wanted my students to have the opportunity to advocate for issues that matter to them. My students have testified in front of the D.C. City Council… and the United States Capitol about gun violence in their neighborhoods. Although they are only eight and nine years old, they are learning that their voices have power.”

Student speaker Neha Aamir was only seven years old when her parents gave her a present that would shape her own path: a U.S. passport. Born in Lahore, Pakistan, the clinical mental health counseling master’s degree candidate extolled the opportunity afforded her as an American citizen, but emphasized the responsibility she feels to serve her community.

“In all those moments that I was stressed finishing this degree, I wondered how my life would have been different had my parents decided to stay back,” she said. “And then I thought of all the Pakistani children who will never have the opportunities that I did.” Aamir, who celebrated her own wedding just days before graduation, works as a mental health therapist with inner-city children in Baltimore.

During the ceremony, eight alumni and friends were also recognized for their contributions, with awards presented by Johns Hopkins Alumni Association President Allyson Handley, EdD ’78, herself a School of Education alumna.

After the ceremony, graduates and faculty, along with family and friends, enjoyed a light luncheon reception at the nearby Baltimore Convention Center.

Two weeks later, on June 8, the school celebrated its gala “destination” graduation, an opportunity to convene degree candidates and families from across the country, held this year at the famous Caesar’s Palace in Las Vegas, Nevada.

There, Dean Morphew presented the Outstanding Recent Graduate Award to Adeeb Barqawi, MS ’15. Shortly after graduating from the School of Education, the 2012 Teach For America corps member and former Houston physics teacher founded ProUnitas, which leverages technology to make social and health services more efficient and accountable in delivering help to children. Barqawi also serves on the steering committee for the Texas Long-Range Plan for Public Education.

The student speaker for the Las Vegas event was Marilyn Virgen. A master’s degree in education and Urban Teachers resident elementary teacher in Dallas, Virgen spoke passionately about the need for cultural understanding as crucial to the future of education—and our country. Students should be engaged in conversations that expose them to differing perspectives, she said. “Foster those discussions with whoever your students and peers of the world are that day, and we will continue to learn, even further, past this degree.”

The June 8 commencement address was given by San Antonio police chief William P. McManus, MS ’98, a graduate of the school’s Public Safety Leadership division. The top law enforcement officer in the nation’s seventh-largest city, where he oversees a department of more than 2,000 officers and 800 civilian positions, McManus had some humble and sometimes surprising revelations for his Las Vegas audience. “I’m here to tell you, it’s OK if you don’t know or if you’re not sure you want to stay in your profession,” he said. “People figure it out when the time comes—when the time is right. I never thought I was going to stay a cop and, here I am 45 years later—a cop.” 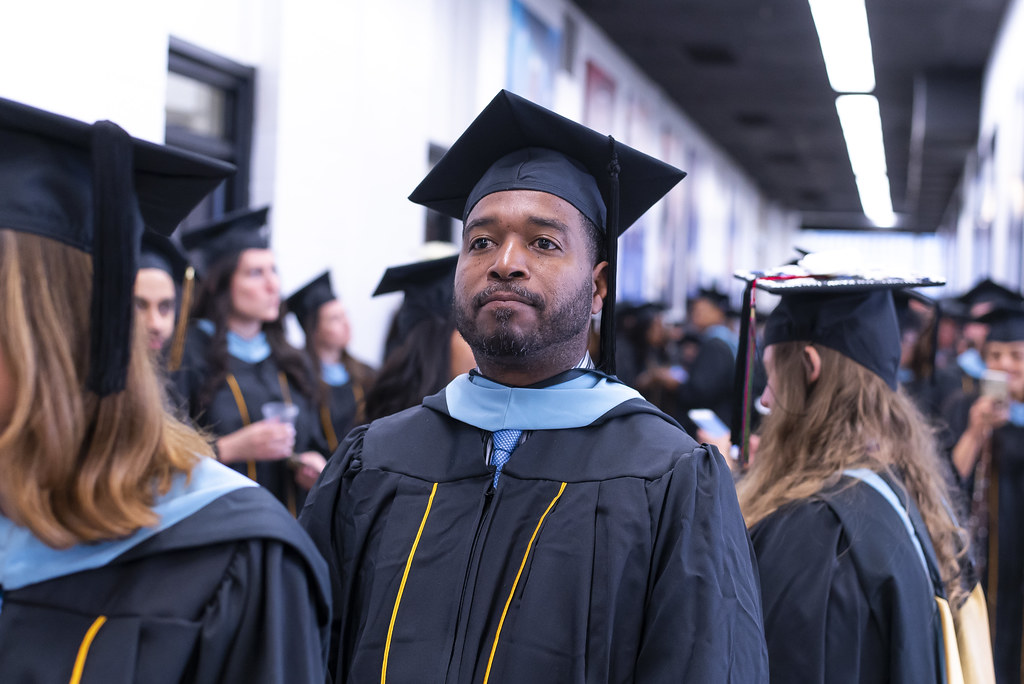 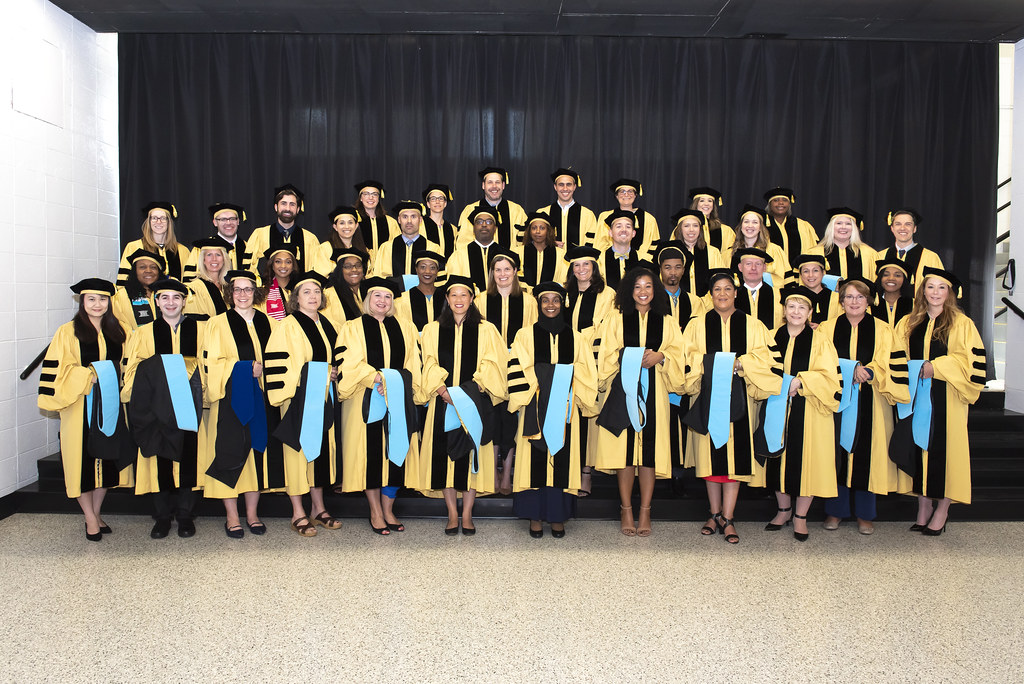 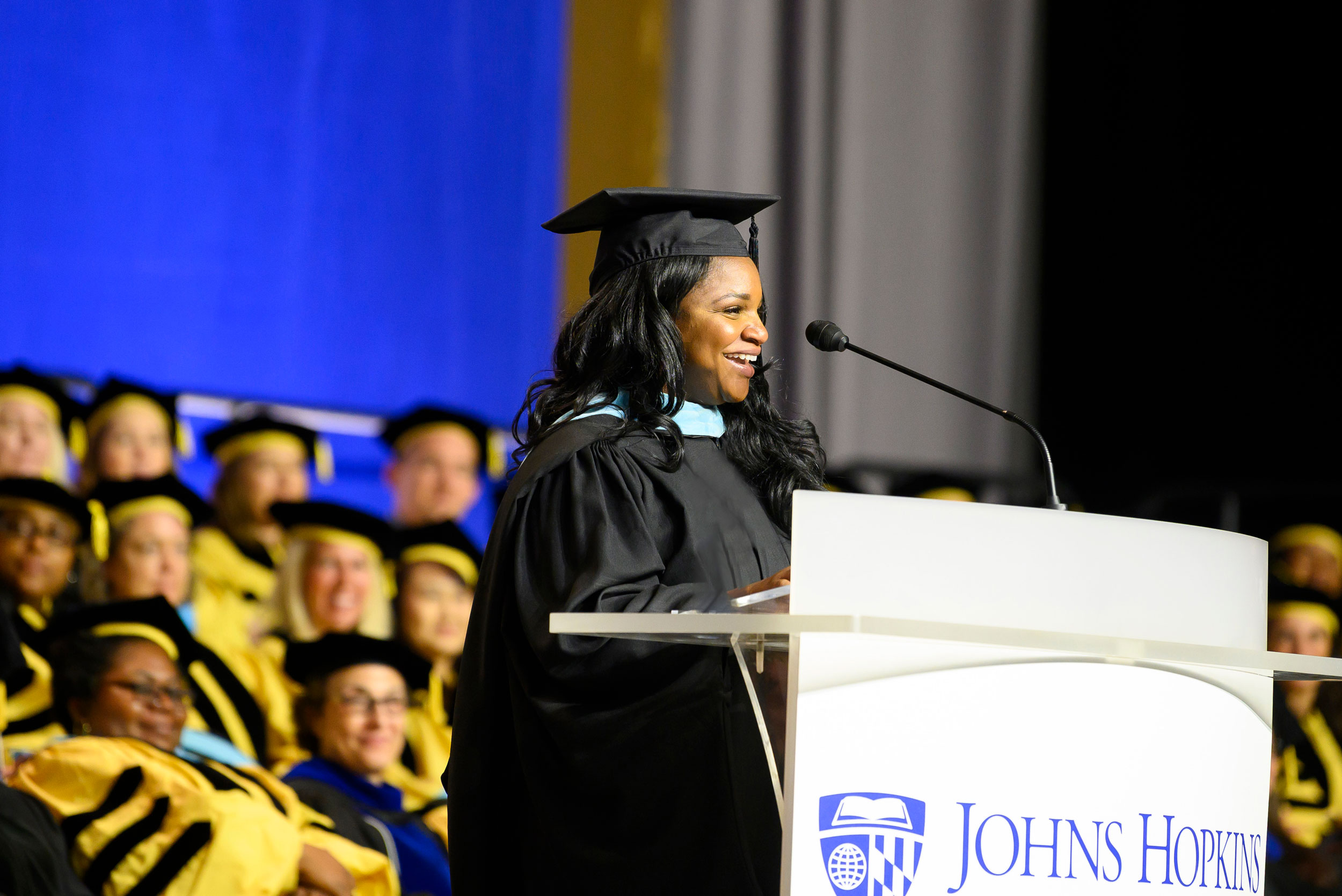 Kelly Harper, MS ’16, delivers the address to the graduates. 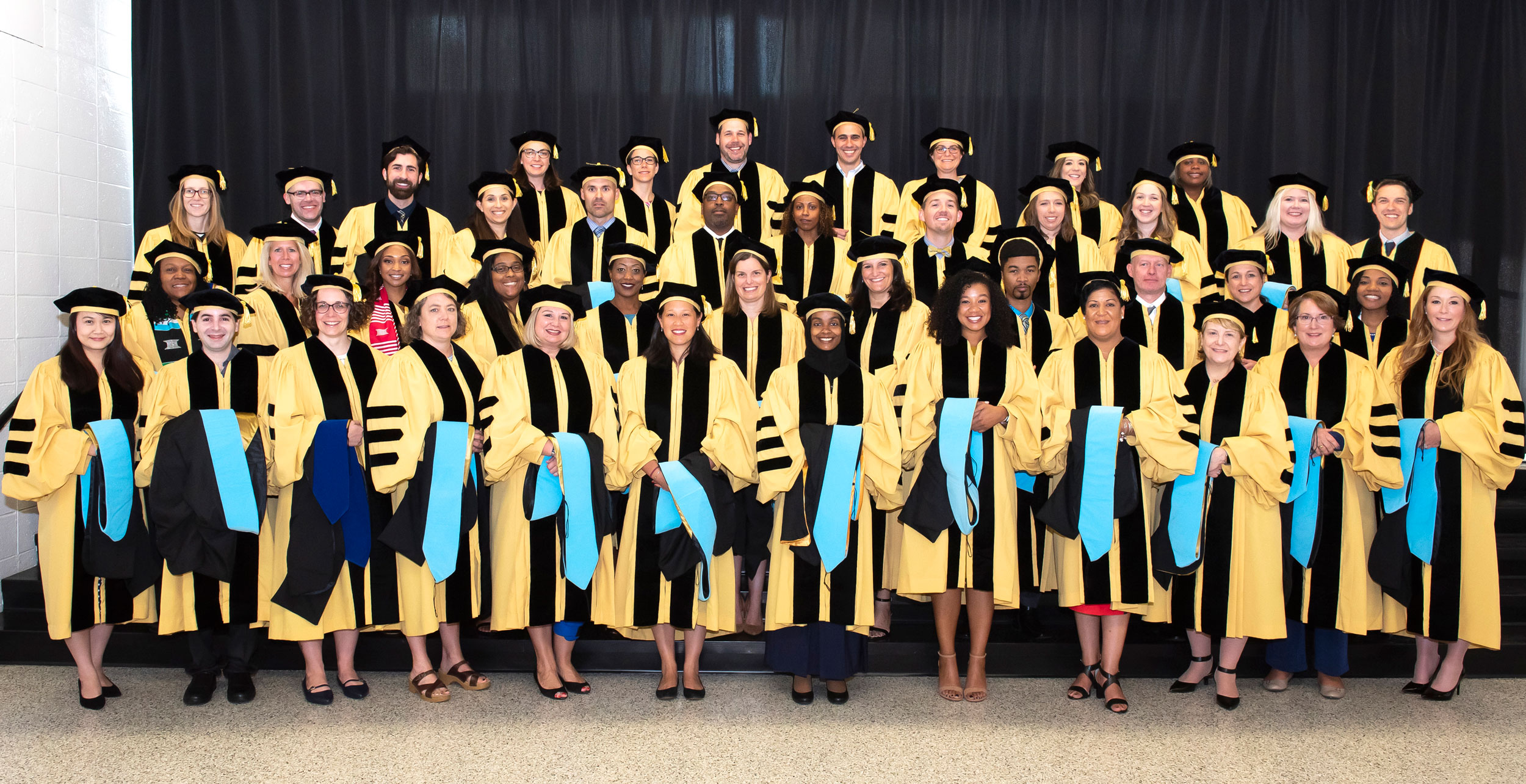 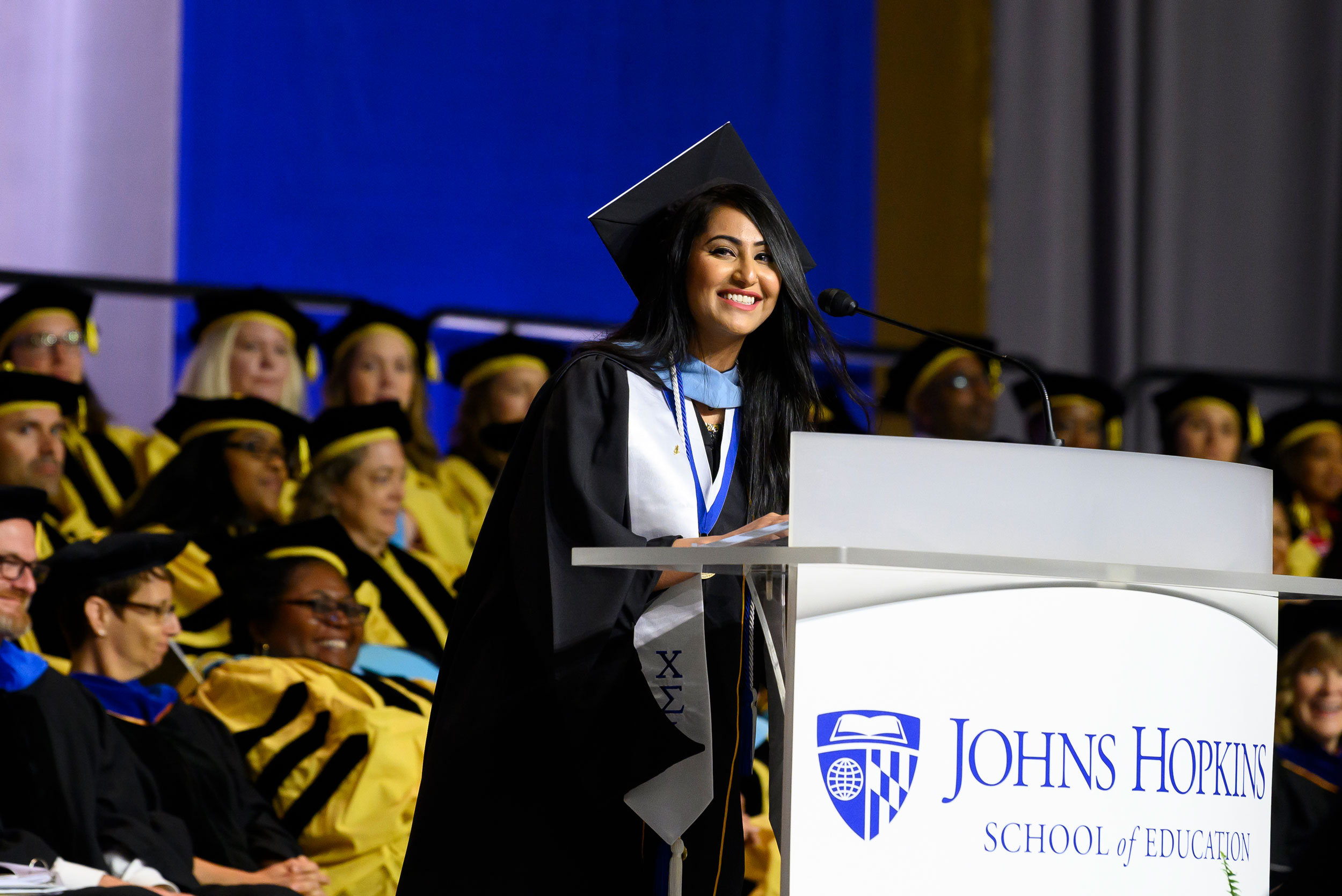 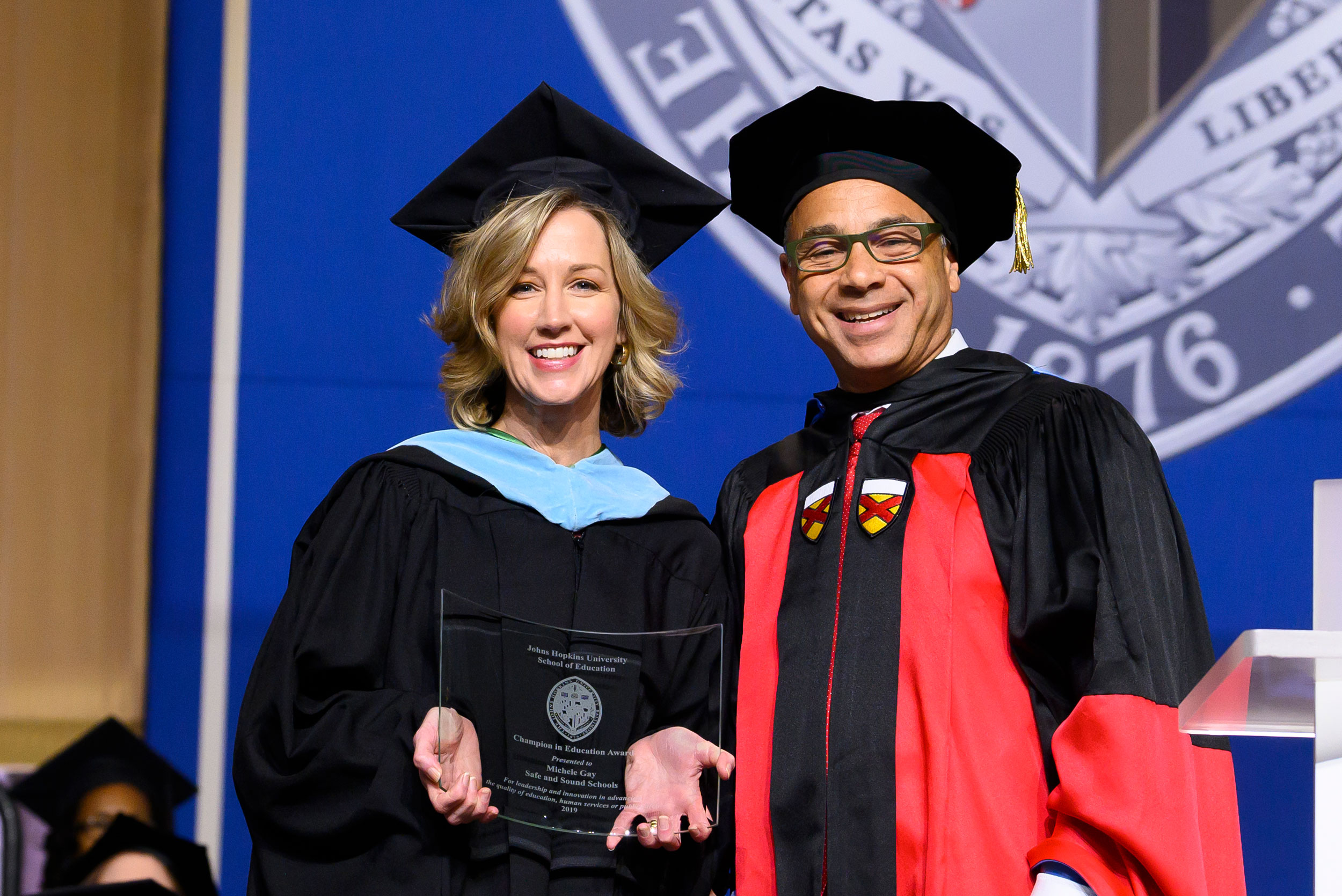 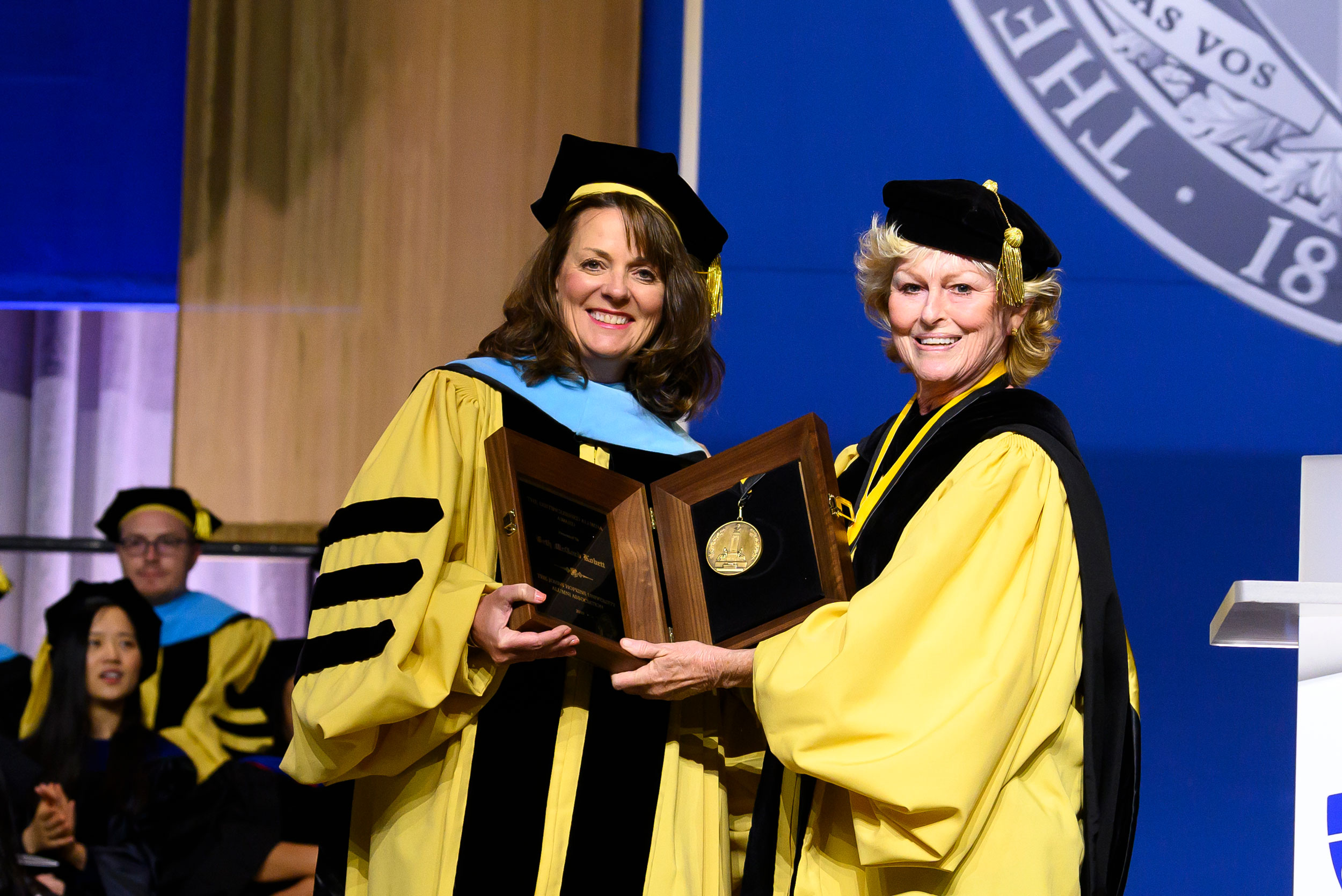 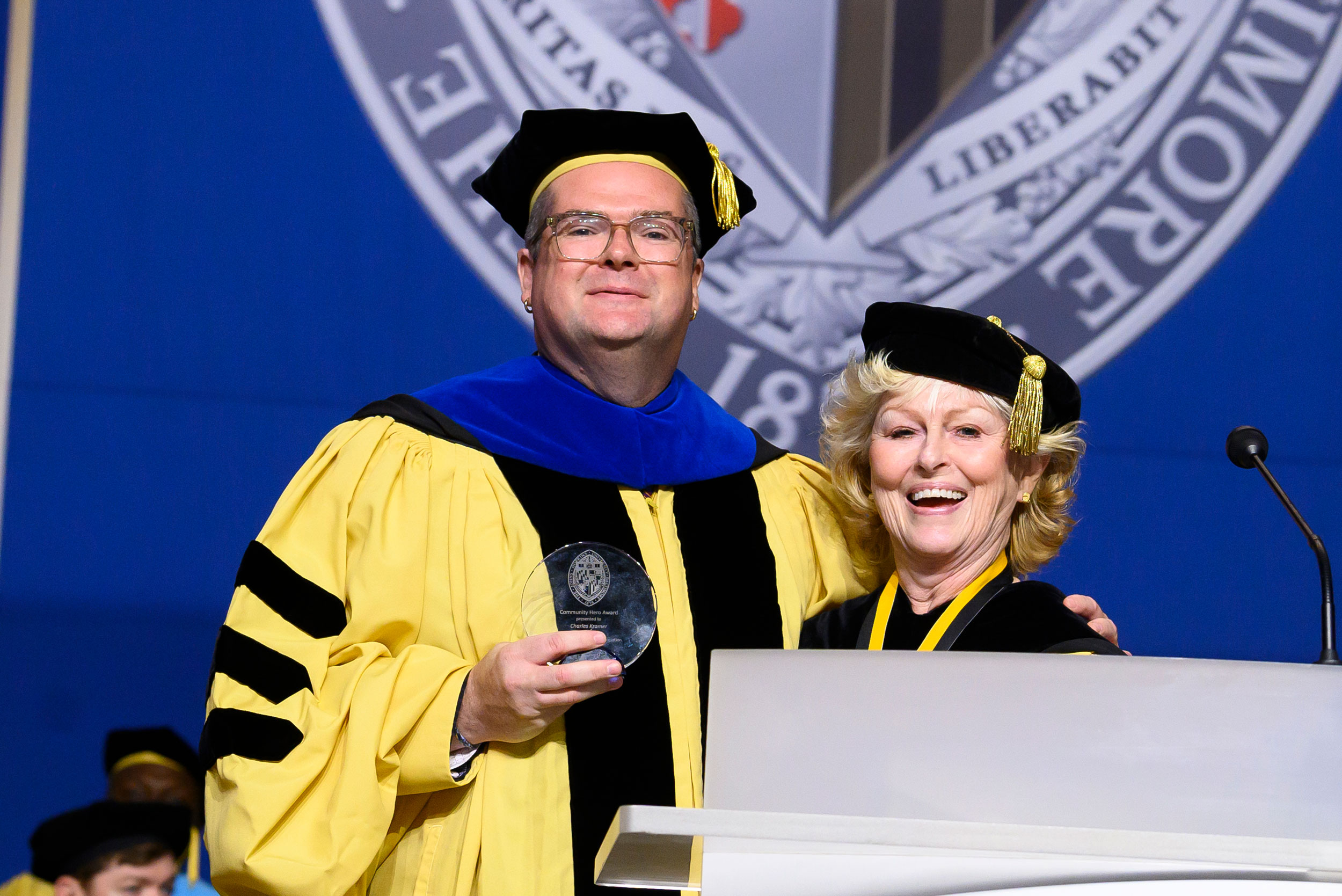 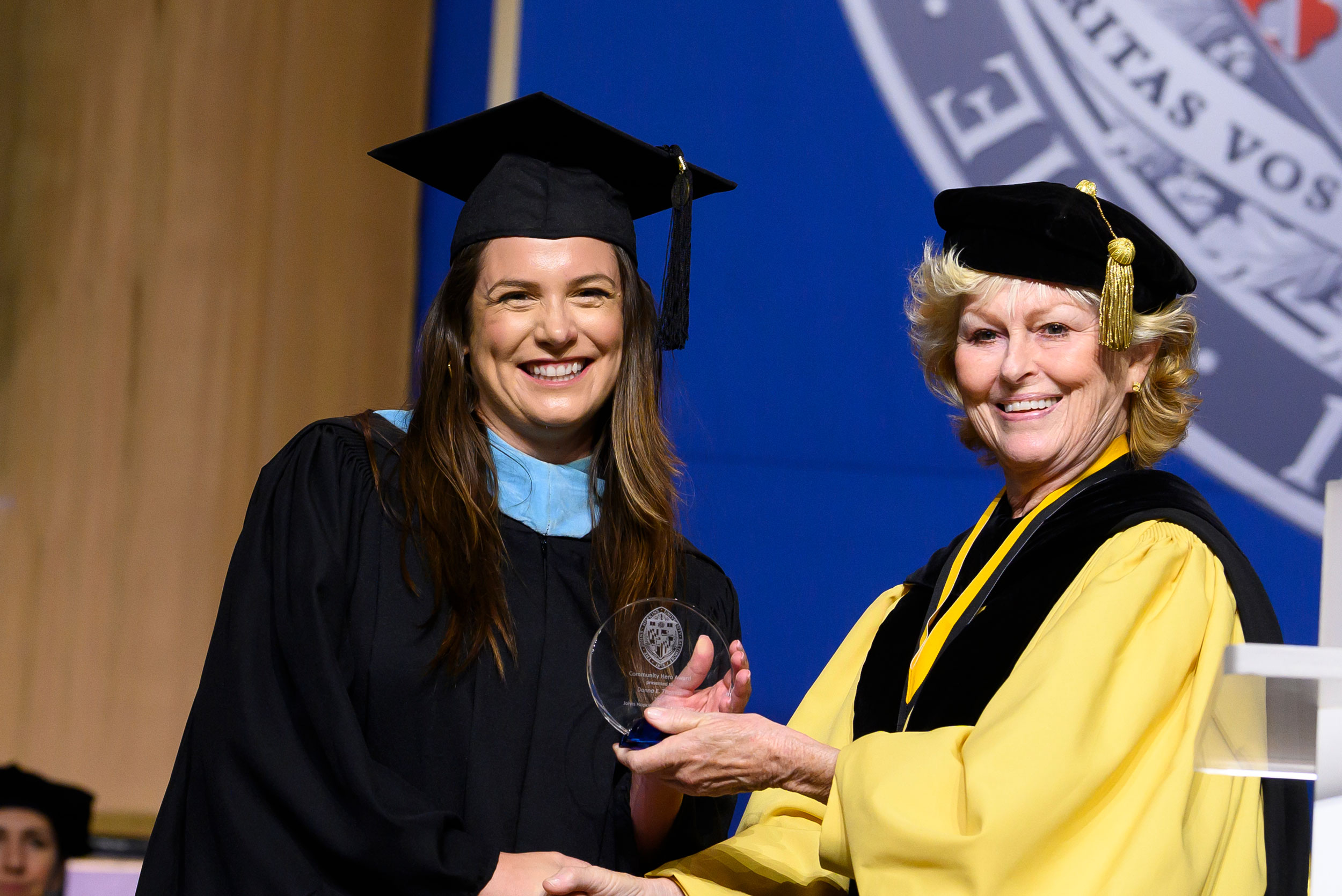 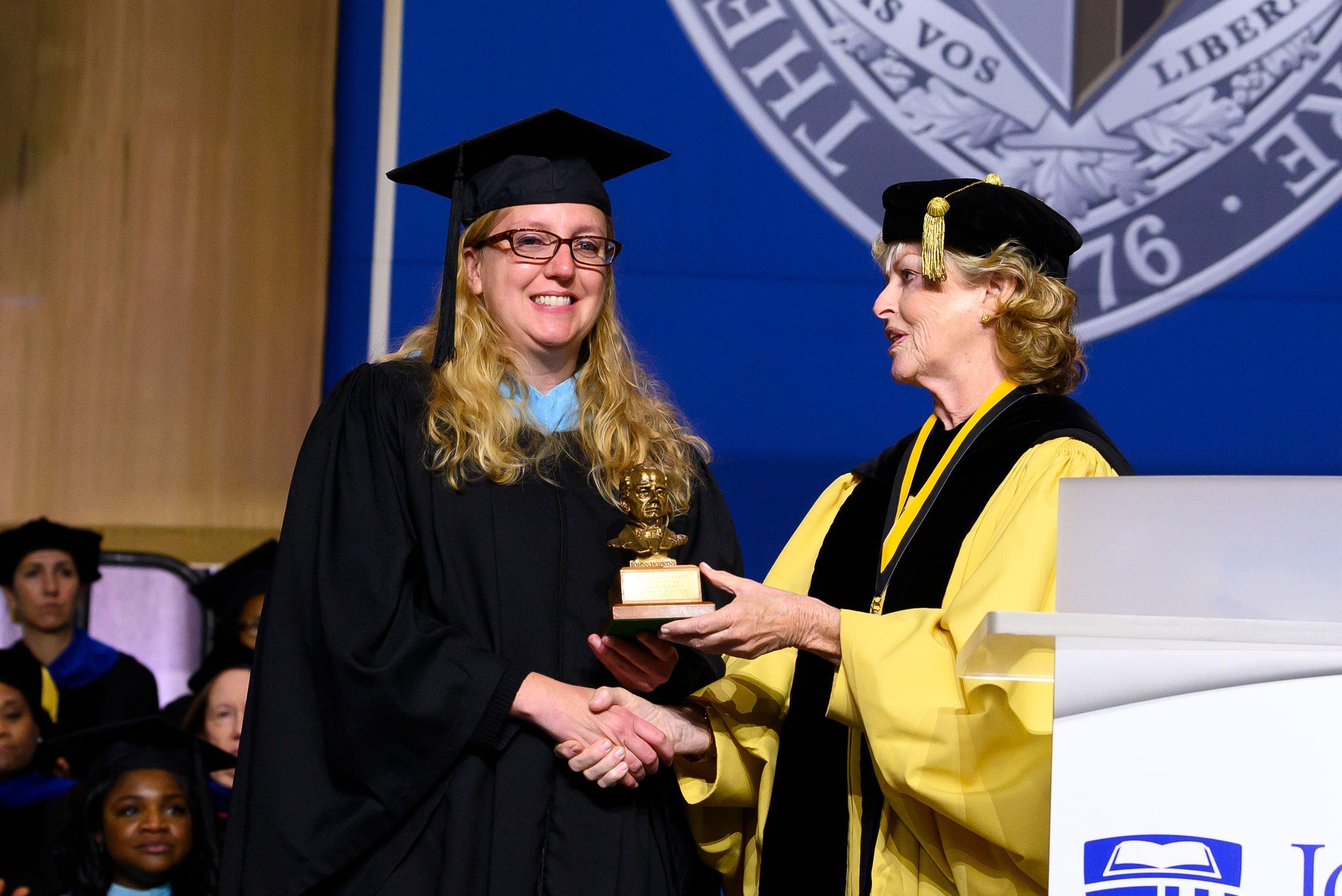 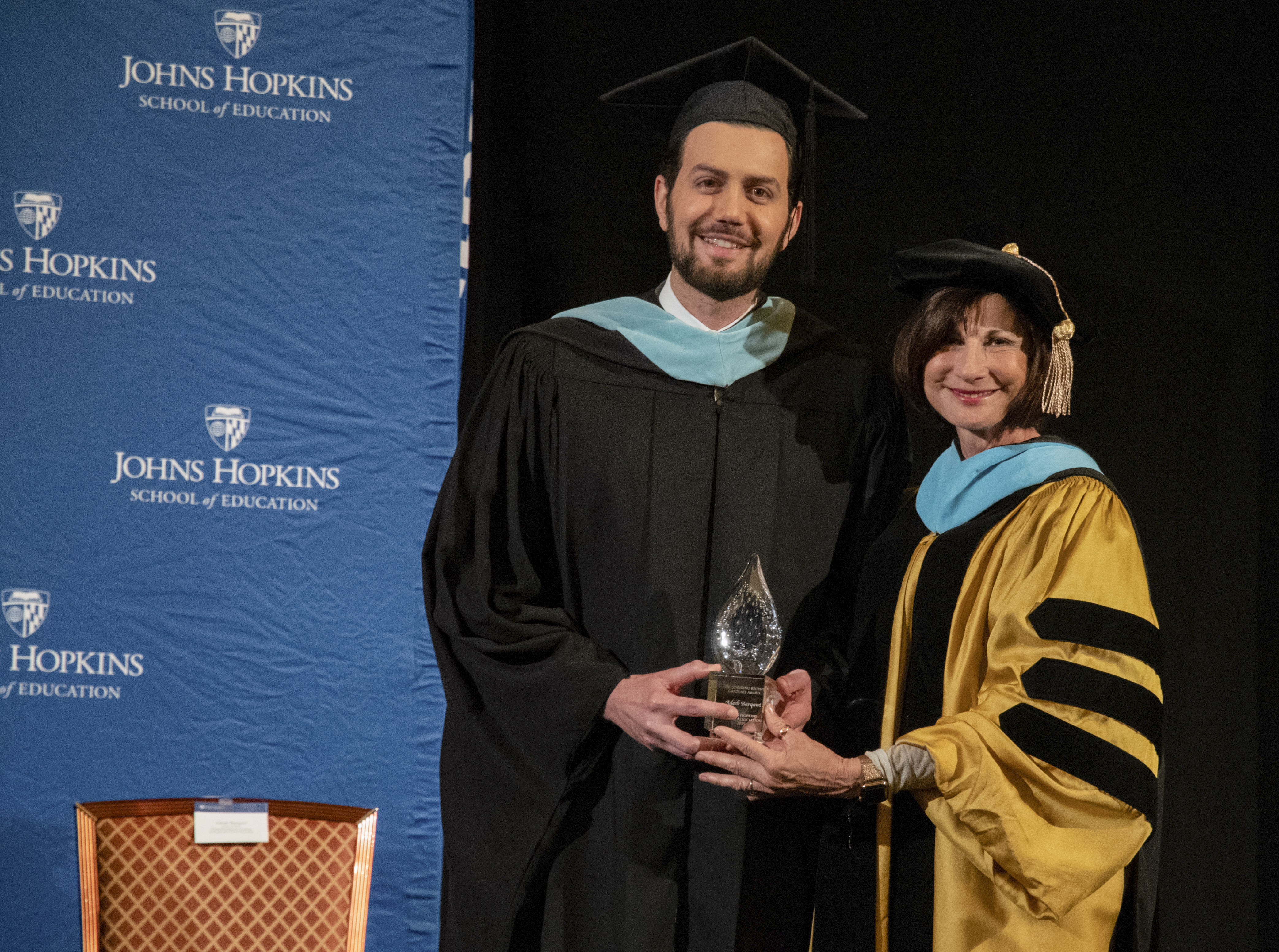 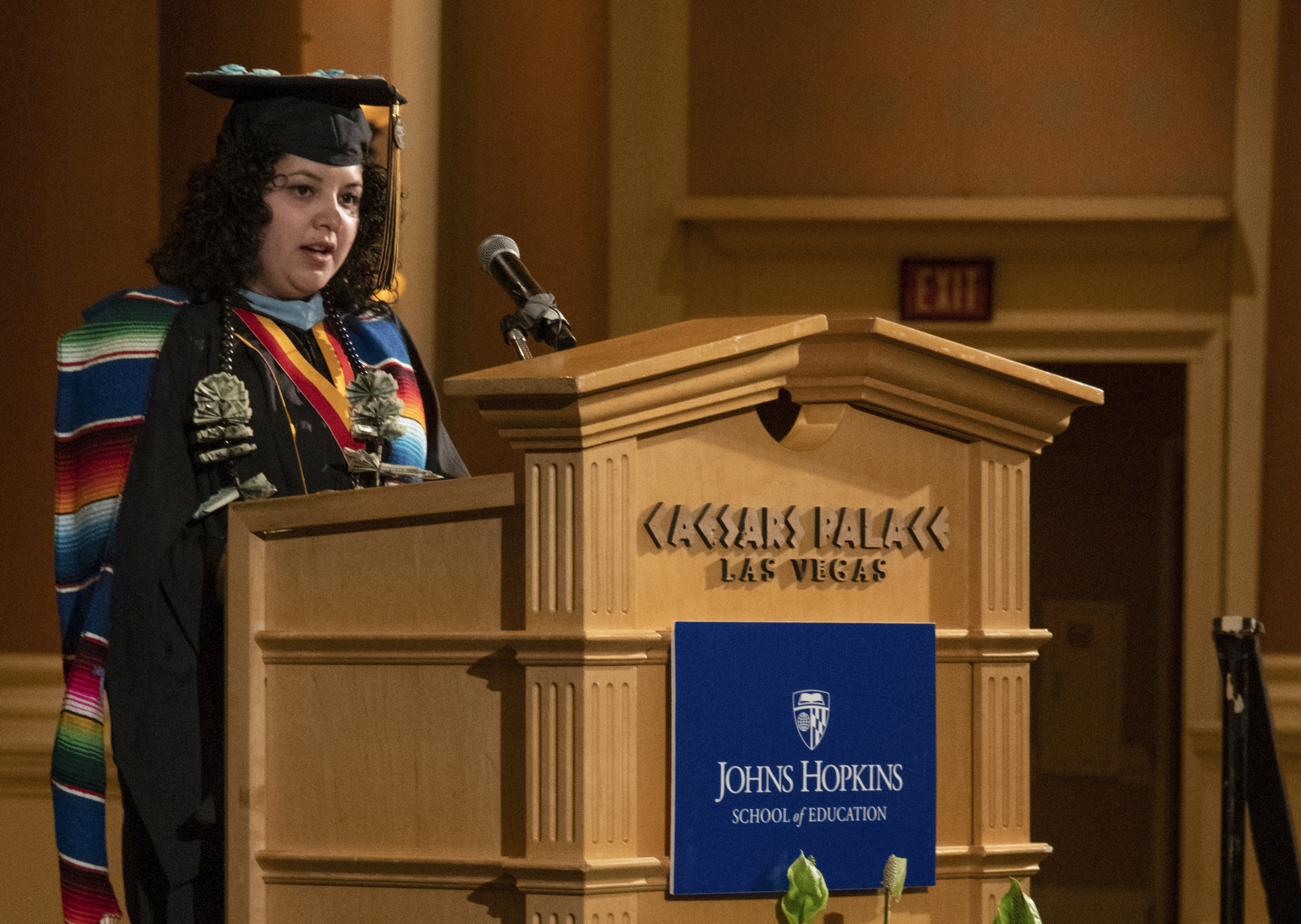 Marilyn Virgen delivers the candidate address to the graduates. 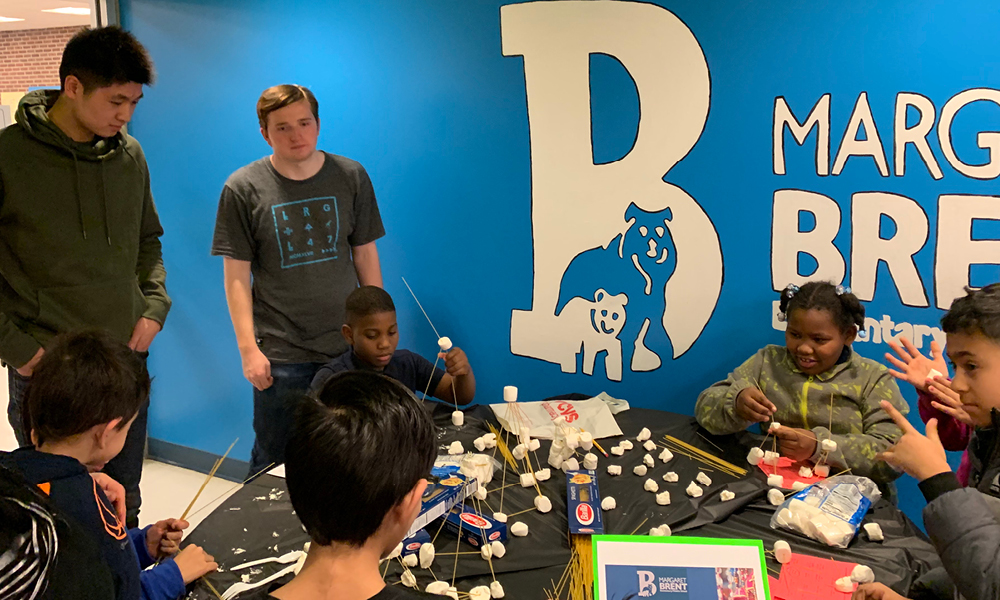 At Margaret Brent, Home Is Where the Art Is