Most Saturday mornings, from his apartment in Jackson, Mississippi, pediatric neurologist Tarif Bakdash sits down at his computer for a remote conference with faculty at Syria’s Free Aleppo University Medical School. His counterparts are in hidden locations around liberated Syria, often literally underground. The class sometimes needs to be canceled because of a bombing.

The subject is curriculum development.

That may sound implausible, even absurd, in the middle of a horrifyingly brutal civil war. That’s certainly how it sounded when Bakdash first discussed the idea with faculty at Johns Hopkins University, where he is now completing online work for his degree in the Master of Education in the Health Professions (MEHP) program. How can anyone possibly talk to people in a place like Aleppo about evidence-based teaching? How can they talk about Bloom’s taxonomy of learning, with Syrian President Bashar al-Assad dropping barrel bombs and chemical weapons on his own people? And yet the anti-Assad physicians behind the new medical school “have created this university,” says Toni Ungaretti, director of the MEHP program and an assistant dean at the School of Education, “and they are laser-focused on providing trained physicians and medical personnel to help the people of Syria.”

The desperate need, says Bakdash, is to find more effective ways to prepare a new generation of medical students in a hurry: What does it take to train a family physician in two years instead of five? How do you educate a nurse not just to memorize conditions and treatments, but to think effectively in a dire emergency, often with no standard treatments available? How do you help medical personnel learn when there are no textbooks? How can a surgeon on the faculty become more effective while teaching not just his own specialty but also anatomy and pathology?

Bakdash, now 52, is no stranger to teaching from both sides of the lectern. He earned his medical degree from Damascus University Medical School and after moving to the United States in 1988, he went on to multiple fellowships, board certifications and a master’s in bioethics. (He describes himself as a learn-a-holic.) Later he went back to teach medical ethics at Damascus University in the years before the current civil war.

But as a teacher he operated on instinct, he says, not detailed scientific knowledge about how education works. “I always loved teaching. I knew how to give a talk, and the students liked me because I was treating them as equals.” They were used to being treated as slaves, he says. “But I had no idea about the outcome. Did I teach them the right way or the wrong way?”

Hence two-and-a-half years ago, Bakdash, who now practices at the University of Mississippi Medical Center, enrolled online in the Johns Hopkins program, a collaboration based at the School of Education among the schools of business, education, medicine, nursing and public health aimed at improving education in medicine.

He focuses on curriculum development, which gets scant attention, he says, even in the United States. “You start your residency and you shadow an attending physician, and you supposedly learn by diffusion and osmosis,” he says. “But there’s no clear-cut curriculum that an attending physician should follow to train a resident in first year, second year, third year. Even if you go on to a graduate fellowship program, nobody talks to you, nobody says, ‘How are you doing? Did you learn what you needed?’” Too often the training and testing is based on memorization rather than creative thinking. “Bloom’s taxonomy of learning tells you how to get from memorization to creativity,” he says. “Unfortunately, we keep students at the lower level.

“For example, let’s say you want students to learn how to handle a certain illness, like absence seizures in children,” in which abnormal electrical activity in the brain causes the patient to blank out for short periods. “In medicine, we give talks, we show slides: It presents this way or that way, and this is the treatment.” Then the resident watches, often passively, as the attending physician sees patients and takes medical histories.

A more useful approach, says Bakdash, is to limit the PowerPoint talk to a brief review of the basics—also covered in the reading the resident has completed beforehand—then actively engage the learner in diagnosing and treating four or five cases of the condition. “We’re not just filling an empty vessel,” says Bakdash. “We take knowledge, and we play with it in our minds and are changed by it.”

The training should include a follow-up, he says. “At the end of six months, say, you give the resident four patients to evaluate, with different types of seizures—absence seizures, generalized seizures, partial seizures and infantile spasms. Does the resident meet all the requirements to diagnose and treat these different types of seizures?” The follow-up should continue even after graduation, he argues. “But nobody does it because nobody has the time, or the money, or the will. As a result we have no idea in any of the pediatric neurology programs in the United States if the way we are training residents is getting them to where they need to be to serve the community.”

Bakdash’s frustration with the way medicine is taught has deep roots. He grew up in Damascus, where he kept his head down and focused on his studies, “driven by a competitive spirit” to be the top student in his class and no doubt also by the need to escape the “pervasive paranoia” and corruption of Syrian life under then-president Hafez al-Assad. He saw his father experience repeated setbacks in his career as a banker and accountant because of the treacherous politics of the Middle East. His mother, a secretary, survived a letter bomb attack and, despite serious injuries, later went on to become an independent businesswoman.

Soon after earning admission to the Damascus University Medical School, Bakdash discovered that the dominant Baath political machine had handed two-thirds of the seats in his class to party loyalists. One of them was the president’s son Bashar al-Assad, then a surprisingly modest and dedicated student, who became a friend. Otherwise, Bakdash writes, in his 2016 book Inside Syria—A Physician’s Memoir, the prevailing academic spirit was “militant indifference.” The expectation was that students would do the minimum work required and, above all, ask no questions, on pain of verbal abuse. “A question was like a challenge to the professor’s authority,” he writes. “Either he was being unclear—and how could that be?—or you were being a blockhead?” After a medical education he describes as “a six-year prison sentence,” Bakdash emigrated to the United States and became a citizen of what he calls “the promised land.”

Syria has, however, inevitably held onto a piece of his heart. The death in 2000 of Hafez Al-Assad, a brutal mass murderer, and the ascendance of Bashar, who had been a practicing ophthalmologist, gave everyone in Syria new hope. Bakdash wrote to his old classmate offering his services, and in 2003 he returned to teach at the Damascus University Medical School on a salary of $150 a month. He found himself in the same auditorium where, as a student, he once heard a cardiologist end a lecture with the words, “Now, if anyone has a question, he must be a donkey.”

Bakdash set out to do it differently, teaching via a Socratic back-and-forth with his students. He assigned no textbook, because that would have required authorization from the Ba’ath Party, and instead he led discussions on medical ethics in a health care system that then ranked 108th in the world: “If you work in a hospital with two respirators and have three patients who will die without use of a respirator, how will you decide which patients to save?” (Hint: The answer did not have to do with political affiliation.) “Are there ethical considerations in treating AIDS patients?” “If a woman is raped and has conceived, is it ethical to give her a medical abortion?” He reminded students that as physicians, “we are not placed as judges over our patients,” and that, under Islamic law, “we have a duty to treat anyone who needs our help—and, yes, that includes… even an Israeli soldier.”

Later, he worked with Syria’s First Lady, Asma al-Assad, to expand care for the disabled. But Syria’s fatal blend of corruption, incompetence and indifference left him deeply frustrated. In one scathing passage, he describes his accomplishments during a six-month stint as Secretary General for the Disabled in Syria this way: “Imagine a blank page.” His group “managed to install audio aids to help the visually impaired at some of the busier traffic crosswalks in Damascus,” he writes. But workers installed some of them backwards: “They said ‘WALK!’ when the traffic signal showed ‘DON’T WALK!’ and vice versa. For all I know, people were run over by our good intentions.”

Having lost faith in the potential for real change, Bakdash returned to the United States to practice medicine in 2010, a year before the current civil war broke out. With that war having since displaced 14 million Syrians from their homes, in addition to hundreds of thousands killed and the economy in ruins, he goes back now only for an annual vacation-time stint treating patients in the refugee camps of northern Jordan.

It’s not enough, he says.

His ambition now is to find a program that will allow him to take what he has learned in the Johns Hopkins program and apply it on a regular basis both in this country and the developing world. “All the big universities have global health programs,” he says. “But nothing big is really happening. We have so much here, but we are not sharing. That’s a moral problem. More than 1.3 billion people in the world don’t have running water; they don’t have toilets.” Many never see a community health care worker, much less a doctor.

The right way to train U.S. medical students and residents, he argues, is to require them to work in the developing world. Ideally, he says, he would rotate one month practicing and teaching in this country, with one month abroad. “Give me the power to run a program, and not just send somebody abroad once every six months. Let’s have consultations on a daily basis: We need dermatology badly in the camps, and all you have to do is put that lesion on the camera in Jordan, and a dermatologist in the United States can diagnose it by computer and prescribe a treatment. Everybody says, ‘How much money are we going to be paying? How much will we lose?’ But it will change the lives of thousands of people. And it will change people here, too, bringing medicine back to what it was—not about business, not about making money—but back to taking care of people.”

Toni Ungaretti says her colleagues in the Master of Education in the Health Professions program are looking to learn from Bakdash. “We are talking about how we can bring more university support behind the work he is doing.”

Bakdash meanwhile is waiting by the phone, and planning his next trip to the refugee camps in Jordan. 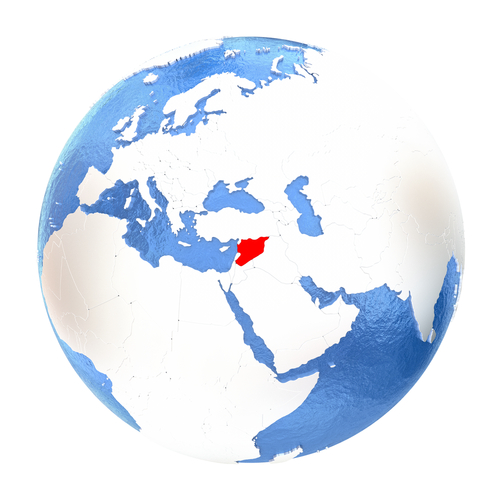 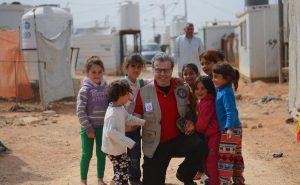 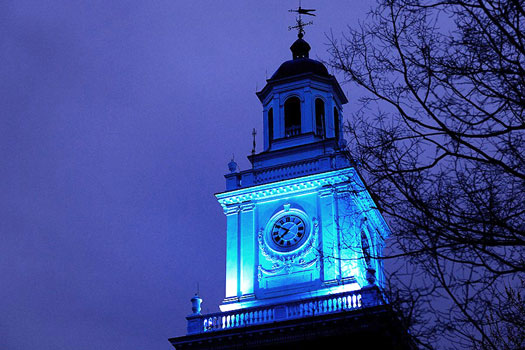 SOE Lights It Up Blue Year-round with Special Education Programs 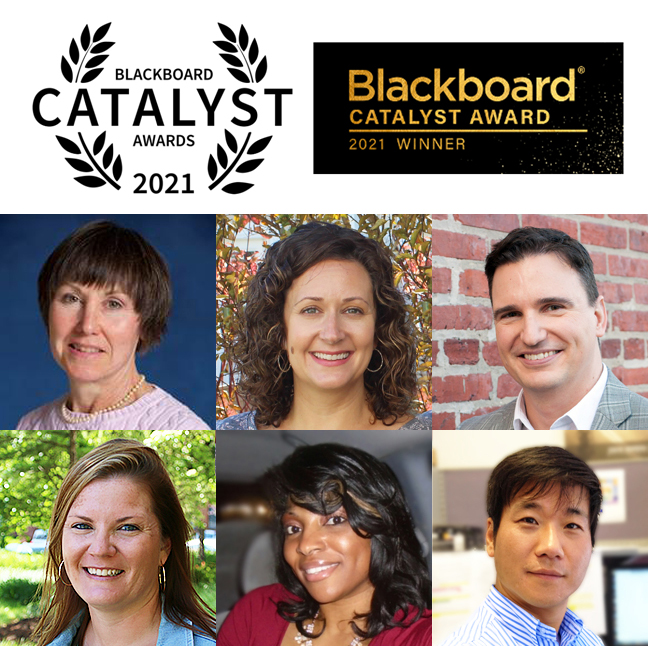 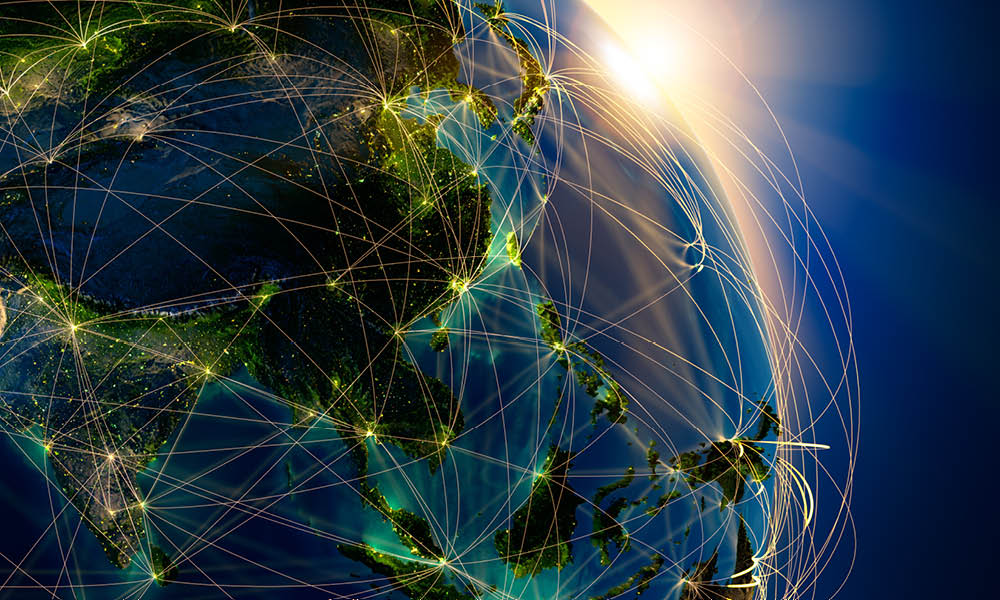